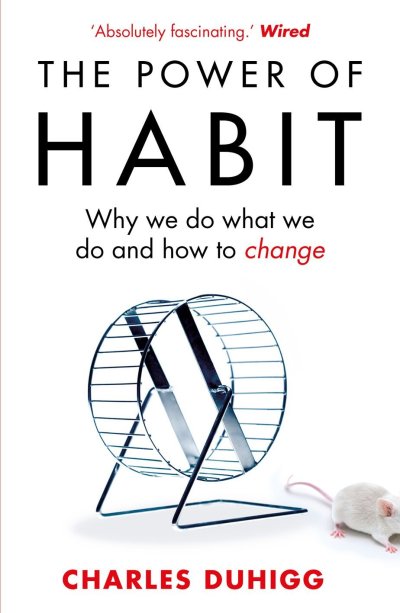 The Golden Rule of Habit Change: You can’t extinguish a bad habit, you can only change it.

Experiments on mice with a labyrinth placing chocolate at the end proved that the mouse was slowly going down the labyrinth and sniffing around at the beginning and the brain was working in overload due to the smell of the chocolate but when the habit was formed the brain switched off and the mouse automatically went to the same place where the mouse knew that the chocolate was placed.

Doctors have been observing a patient over the years who suffered from brain injuries that caused his short-term memory to be damaged and he could not remember anything for more than 20 seconds. Despite all this, he could go out on walks alone and remember how to come home or find his way around the house to the kitchen and bathroom. When the doctors asked him where the kitchen was he didn’t know. Doctors believed that the patient formed these new habits despite his inability to make new memories.

Forming and changing habits is described in more detail. It is believed that both bad and good habits are formed with the habit loop by identifying a cue, defining the routine and the reward and performing this cycle over and over again until the habit is formed and automatically performed. The cue would trigger a certain routine and at the end of the routine the reward is expected.

Some of the most common habits are washing our hands after using the toilet or before preparing or eating food, brushing our teeth in the morning and in the evening. These have been formed from the early ages by our parents but some of these habits are used or formed by ad agencies for years to convince people in buying the products.

“Foaming is a huge reward,” said Sinclair, the brand manager. “Shampoo doesn’t have to foam, but we add foaming chemicals because people expect it each time they wash their hair. Same thing with laundry detergent. And toothpaste—now every company adds sodium laureth sulfate to make toothpaste foam more. There’s no cleaning benefit, but people feel better when there’s a bunch of suds around their mouth. Once the customer starts expecting that foam, the habit starts growing.

Several examples of forming good habits are described in this book like the coach who built habits that lead his NFL team to become champions but the most interesting I found was how the coach of the famous swimmer Michael Phelps formed habits that lead him to stay calm during the races and to win so many medals.

Champions don’t do extraordinary things. They do ordinary things, but they do them without thinking, too fast for the other team to react. They follow the habits they’ve learned.

Smoking is one of the biggest examples of a bad habit and even bad habits can be changed. If people do quit the bad habit partially still remains. Many people smoke when they drink alcohol/coffee (cue) and they get so used to holding a cigarette with a glass a wine/cappuccino (routine) that even though if they quit smoking the cue would still trigger the craving.

Rather, to change a habit, you must keep the old cue, and deliver the old reward, but insert a new routine.

The solution to changing a bad habit into a good habit is keeping the cue and the reward but identifying a new routine. This has been applied for years by the Alcoholics Anonymous with the help of the 12 step program and the support of the community.

The same process that makes AA so effective—the power of a group to teach individuals how to believe—happens whenever people come together to help one another change. Belief is easier when it occurs within a community.

These are all behavior habit loops. The second part of the book, The Habits of Successful Organizations, describes how Starbucks introduced the willpower habit loop in their training program to prepare the baristas to react friendly in any bad situation and it lead to the great success that the company is today.

The book described also organizational habit loops where processes and truces are formed out of habit which could lead to chaos, like the underground fire in London caused by the lack of communication between departments or the multiple malpractices at a hospital caused by the tension between the nurses and surgeons.

The most interesting example is how Target increased the sales in the mommy and baby department by analyzing the habits and behavior of pregnant women and predicting the habits and needs of women in their second trimester and manipulating them by sending them personalized coupons for diapers and other baby stuff to lure them to shop at Target.

Someday soon, say predictive analytics experts, it will be possible for companies to know our tastes and predict our habits better than we know ourselves.

It has also been proven that small wins lead to a greater success. Starting to exercise leads to a better nutrition and eventually less stress. The new president of Alcoa Paul O’Neill improved the entire business by introducing the zero injury concept and a safe environment for the workers which was only a small first step leading to bigger greater ideas which drove the company to success.

Small wins are a steady application of a small advantage.

This is a fascinating book and I haven’t finished it yet but I see now how many habits  I have unconsciously formed in my life.

I started planning my workout schedule here on my blog and I am packing my gym bag or preparing my running clothes the night before (cue) which motivates me to regularly go to the gym or running (routine) and this continuously makes me feel and look better (reward).

My nutrition has always been a big issue but ever since I started tracking my meals on MyFitnessPal (cue), I’ve been eating more healthy (routine) which, combined with exercising, makes me feel and look better (reward).

I’ve been also able to change bad habits, I quit drinking 5 cups of coffee every day by reducing it to only 2 cups and swapping 3 cups with tea. The cue and the reward (warm beverage) remained the same but I changed the routine from pressing the button on the coffee machine to preparing myself a tea.

I hope I could capture your interest and that you will read it too. I highly recommend it! You can also find great information on the author’s website.

It is facile to imply that smoking, alcoholism, overeating, or other ingrained patters can be upended without real effort. Genuine change requires work and self-understanding of the cravings driving behaviours.

3 thoughts on “The Power of Habit by Charles Duhigg”