I registered for Kayla’s newsletter back in December last year. I was so glad when the email came that Kayla is coming to Berlin in February and I could add myself to the list to be among the first to register for the bootcamp.

I was in Austria on a ski holiday when I woke up in the morning and I read the email that the registration for the bootcamp was open. I forgot all about going to breakfast and instead quickly registered because I knew that it will be full fast which it was: registration closed after 3 hours.

We decided to take this opportunity with the bootcamp in Berlin to visit some friends who just had a baby so I planned a nice long weekend in Berlin. I booked a hotel in Steglitz on the recommendation of our friends and took a day off on Friday to have enough time to drive to Berlin. The bootcamp was on Saturday and we planned to drive back on Sunday.

That week was pretty chaotic and a lot was going on at work so I didn’t have much tiem for  preparation. I packed on Thursday evening, literally spending 2 hours trying on all my sports clothes to see which one I would wear to the bootcamp.

I woke up early on Friday so I can go running as I’ve planned and then I waited for my boyfriend to get ready, pack and go get a haircut. *eyeroll* 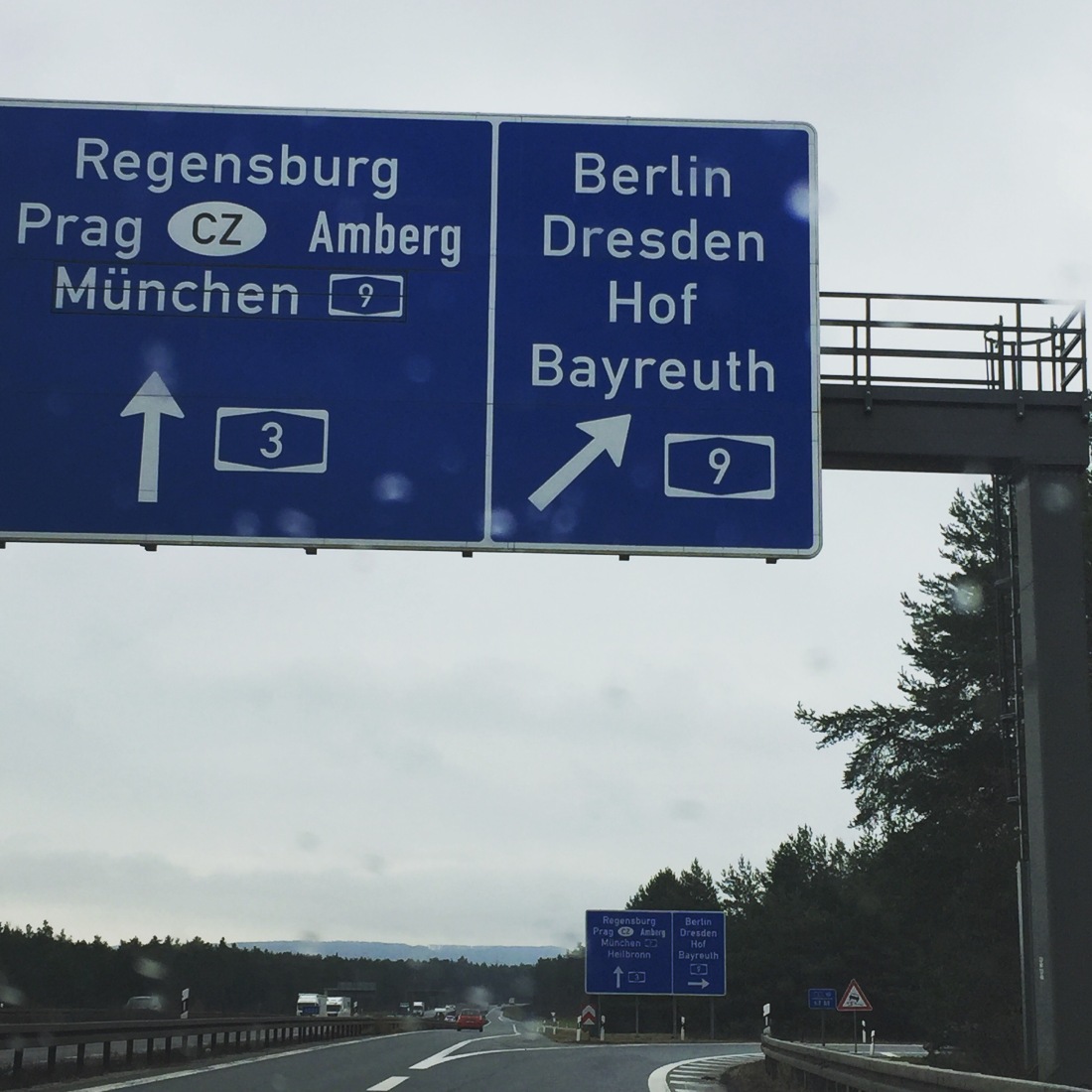 The drive to Berlin went smooth, we stopped for lunch and a coffee break and arrived to our hotel in the afternoon. We spent the evening at our friends’ place, had dinner and played with the baby.

On Saturday we visited Steglitz and did some shopping after breakfast. Of course I had to buy new sports clothes for the bootcamp too. 😛 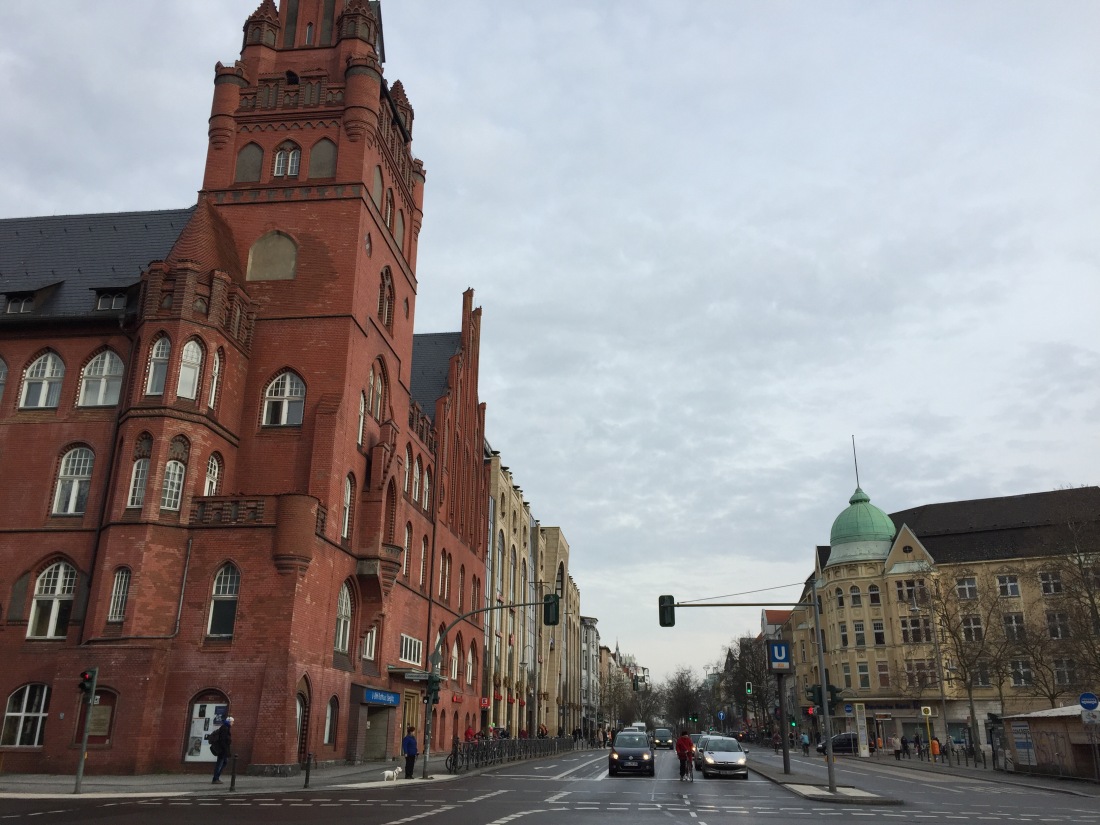 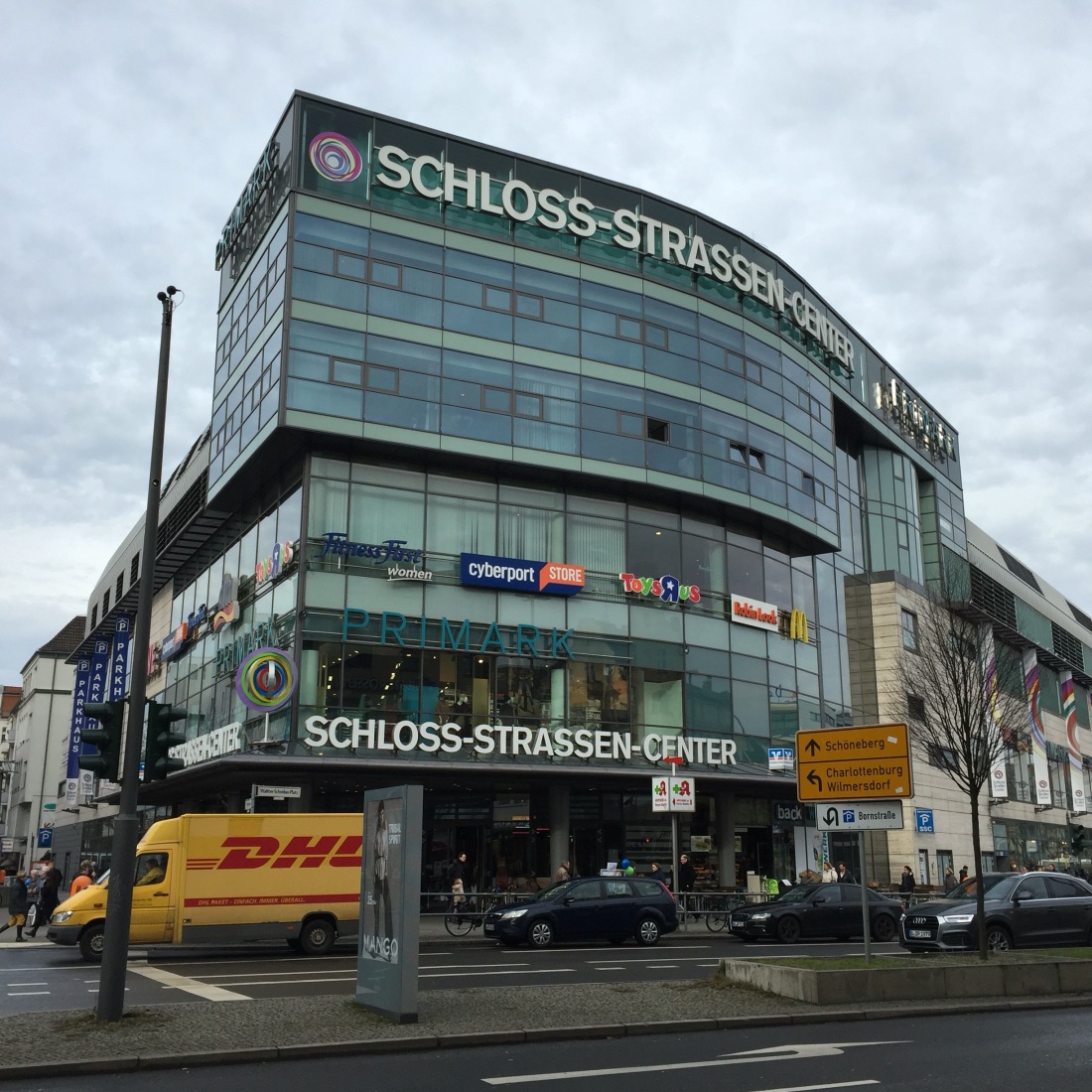 I quickly changed into my sports clothes at noon and our friend picked us up from the hotel (my boyfriend went with him for a walk and coffee to Kreuzberg While I was at the bootcamp) and drove me to Arena Berlin. It was easy to spot the entrance because there were bunch of girls in sports clothes and yoga mats waiting in line. 🙂 I arrived 30 minutes before we could enter and there was already a big line in front of me. The line got a lot bigger as the entrance time approached.

The doors opened at exactly 14 o’clock and we went in to find ourselves a spot and get our mats ready. The Arena is huge and there was plenty space for everybody. I chatted with the girls around me and soon Tobi came on stage to entertain us. 🙂

There was a competition that I unfortunately missed, one of the girls who posted a pic on Instagram with the Kayla pose received a present from Tobi with a bunch of Kayla merchandise. 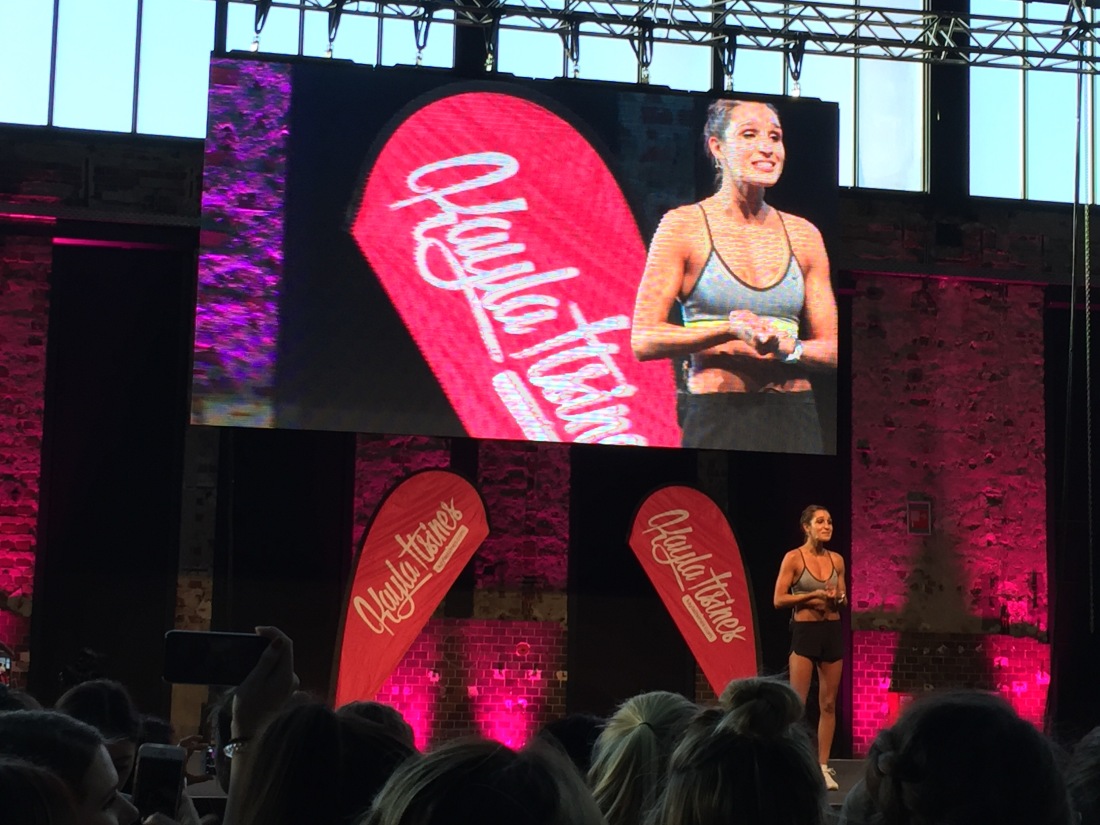 Soon it was 15 o’clock and Tobi introduced Kayla and she got on the stage. Obviously lots of yelling and crying happened, Kayla thanked us for coming and sent us to our mats to begin the workout. The workout was one of the toughest that I ever did. It was in a different format than the usual BBG that is 4 x 7 minutes circuits.

Needless to say that we were all huffing and puffing during and after the workout. We went to the stage to take a group picture with Kayla and she distributed some more of her merchandise. I didn’t catch any. 😦

Finally we got a chance to meet Kayla and take a picture with her. I was lucky to be near the stage when the line to meet & greet Kayla developed, so I was at the beginning of the line but there was so much pushing that we ended up like in a can of sardines. We only had a couple of seconds to talk to Kayla so I thanked her that she came to Berlin and they had a photographer ready to take a pic of us. I gave my smartphone to one of the organizers standing there so he can take a pic with my phone too. As soon as the pictures were done, I was quickly rushed off so the next girls can get to Kayla.

I gathered my stuff from my workout spot and went back to the picture area where there was still a huge line of girls wanting to meet Kayla. I took some pics of Kayla alone and then went out to wait for my boyfriend and his friend to pick me up. I got a small goodie bag from Shape with some magazines and things.

Thank you to Kayla for a great workout and thank you to Shape and Zalando for organizing and sponsoring this event. It was amazing and this was the best day ever!!!

We drove back to the hotel and I was still buzzing with the whole bootcamp. It went by so fast that I barely had time to realize what was going on. I wanted to meet so many BBG girls but never got a chance to. 😦

We went out for dinner with our friends to this Turkish restaurant and I tried Kumpir topped with different salads and I shared a caramelized rice pudding with my boyfriend. I didn’t eat anything whole day. 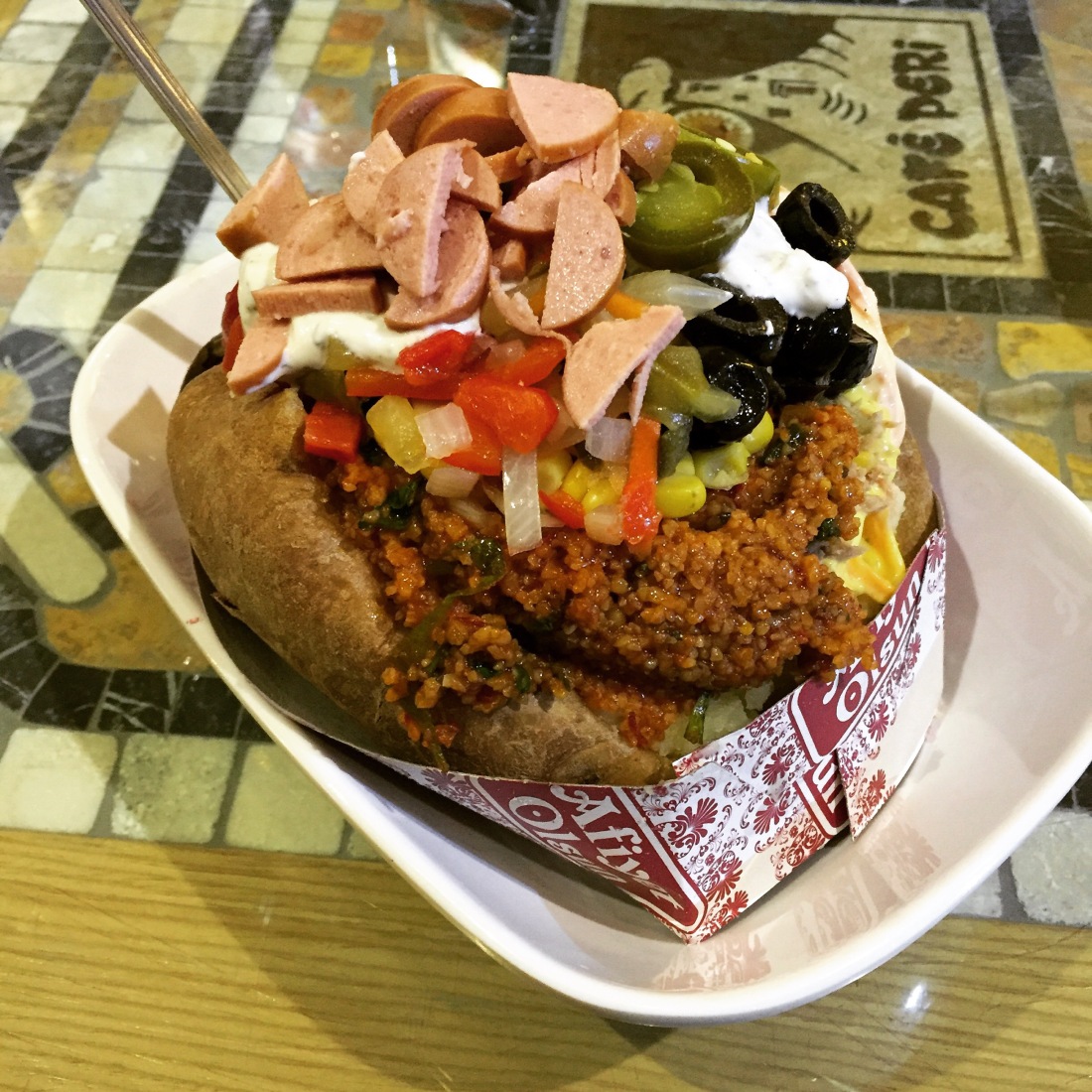 On Sunday I overslept and woke up at 10 am, almost missing #our breakfast. We decided to go sightseeing in Berlin for a few hours before driving home because the sun was out and it was such a beautiful day.

We took the S1 to the Brandenburg Gate where we picked up a latte from Starbucks and took some pics of the gate and the surroundings. We walked to the Reichstag building, but we couldn’t go in because it was booked out well in advance. 😦 We took a walk along the Spree and then on Unter den Linden but they were building in the middle in the park. We continued our walk to Potsdamer Platz and checked out the Sony Center. 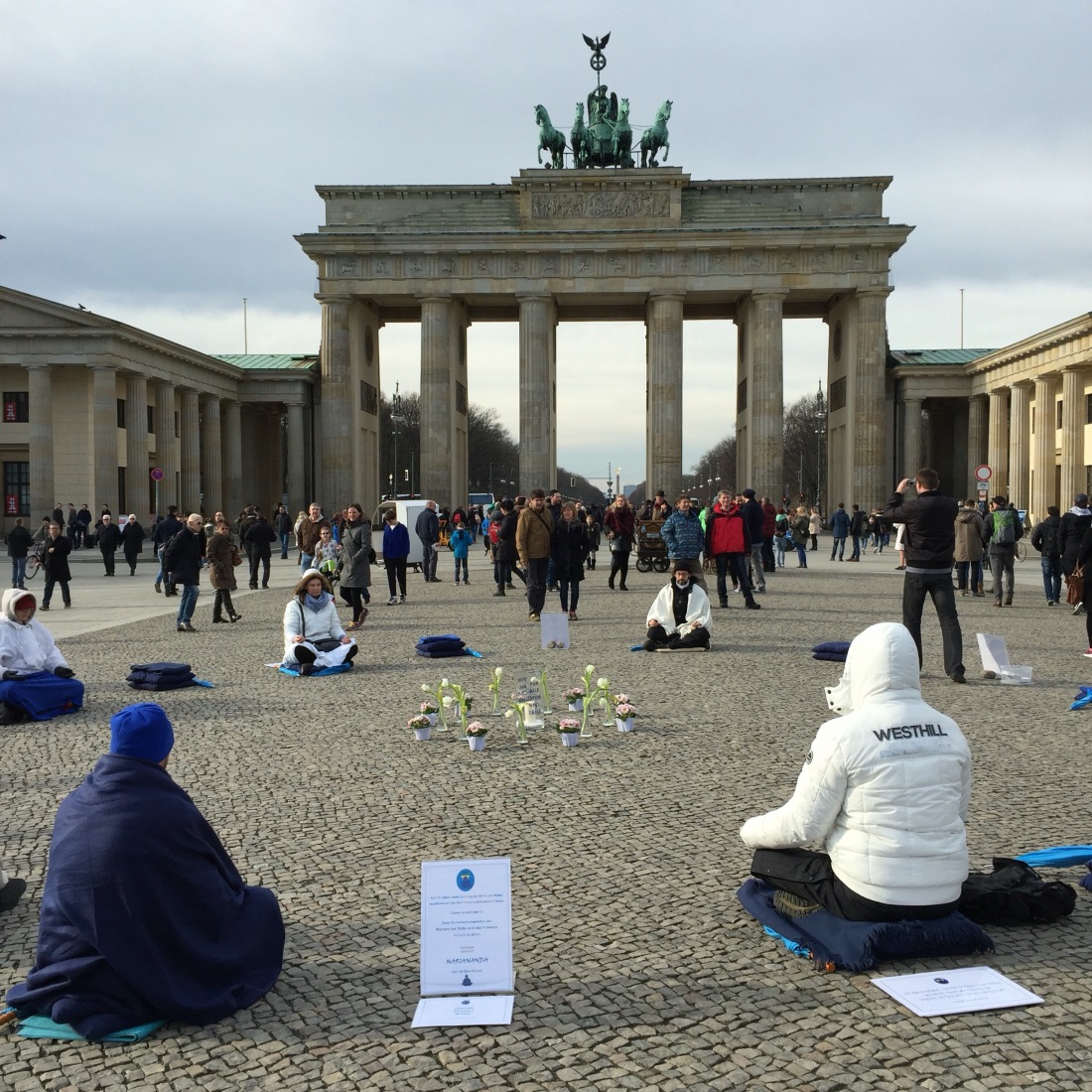 It was afternoon already so we decided to get back to Steglitz with the S1, have some burgers at Hans im Glück Burgergrill and then drive back home. We didn’t catch any traffic jams on the way back so we arrived home in 3,5 hours.